Information is not enough. 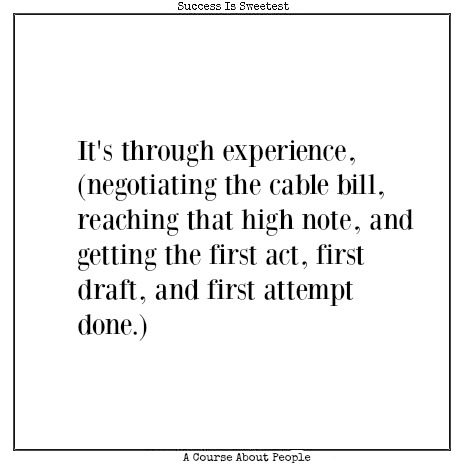 It’s through experience, (negotiating the cable bill, reaching that high-note, and getting the first act, first draft, and first attempt done. )

Bit by bit. That’s how we transform ourselves and how to create great work.

At Pixar Studios (the pioneer of digital animation films) they use ‘dailies’, raw, unedited work to give constructive, midstream feedback. Everyone shows up to share incomplete work. No apologies. No embarrassment. A master class in how to see and think more expansively. Leaving the door open for the unexpected and keeping everyone in top form.

No surprise: Short experiments help us to get unstuck and are easier to start, test, tweak and finish.

THINK:
Starting out with sprints and 5ks instead of marathons
Devising short scenes, one acts + monologues as the DNA of the full length play.

AND THINK: Experimenting on a small scale as a relatively inexpensive way to f___ up and still profit.

In Pixar’s case, they use short films as a way of experimenting in the hopes of getting a glimpse at something bigger.

In “Bird by Bird”, Anne Lamott suggests that we work on SHORT ASSIGNMENTS: “Pick a one-inch picture frame and figure out one inch piece of the story to tell. One small scene, one small memory, one exchange.”

In “Ready For Anything”, productivity guru David Allen, preaches about the CRITICAL 20%: “Find the small interesting things, do them well, do them consistently for maximum impact and major results.”

It’s like discovering gold. Taking that (small) thing and creating a lab where matters of the heart + soul are worked out.

Finding that space where it’s okay to suck.

Throwing ourselves into some kind of free play, earning a few hard knocks, and seeing what animates us.

It feels good to loosen up and not take ourselves so seriously.

Try it. Maybe not (small) all the time, but at least (small) some of the time. This is how we open ourselves up to transformation.

And so it goes… forever.