SUNDANCE-AND THE LIKES OF ME 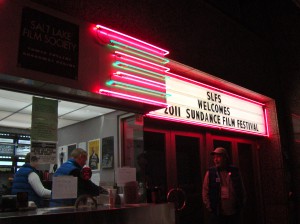 I just got back from SUNDANCE-nearly two decades after Robert Redford founded the film festival as a platform for independent artists. I went there wanting to love each movie and came back inspired and jones-ing for more.

While there, I also stumbled on a simple but remarkable theme.

Besides entertaining-our best stories press hard against our humanity.
An outcast becomes an unlikely hero
We come of age
Grope in the dark
Spill blood
Forgive our enemies
and find our way back again.

All this knuckling around in the backroads of our imagination- and the give and take of sharing a tale- is not an idle practice.

And then there’s the deal makers and the acquisitions of ones story, bought and sold for millions. Unless, you’re indie-rebel Kevin Smith, (Clerks -Sundance 1994), who bought his own movie RED STATE for $20 bucks.

Film critic, Kenneth Turan celebrates the indy movie in Never Coming To A Theater Near You, and he writes, this independent movement could be better, but a world without these films, isn’t a world we’d want to contemplate.

In the end, what brings it all full circle, is the likes of me, (a curious movie lover) willing to que-up on a cold winter’s night for a lo-fi mis-adventure or a little existential sci-fi romance.

This entry was posted in Essential Dish. Bookmark the permalink.